Are You Wondering If You Have a Gluten or Dairy Intolerance? It May Not Be Your Food 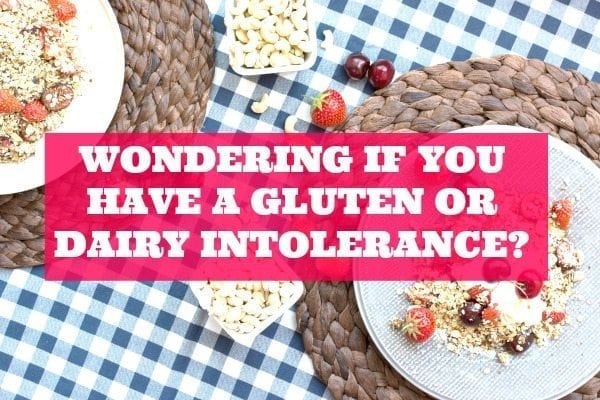 Have you been wondering if you  have an intolerance to gluten, wheat or dairy? Do you suffer from irritable bowel type symptoms such as bloating, stomach pain, fullness, heartburn, diarrhea or constipation?

It may not be caused by the food you are eating.

Don’t get me wrong, food intolerance is real…I have a complete set of my own intolerances so I understand and empathise with all people suffering from dealing with the effects of certain foods. You may have worked out that you do in fact have an intolerance and have found ways to manage it, or you may have just started wondering if the foods you eat are responsible for some rather uncomfortable and debilitating symptoms.

The good news is, not all gastrointestinal symptoms are caused by the food we eat. The following behaviours may also be responsible for the same symptoms of dairy or gluten intolerance.

For example, one lady I saw had terrible indigestion and stomach pain after her evening meals. She came to me to find out how to start a gluten free diet. When I spoke to her I found out that when she ate, she also talked a lot. Her family always told her to ‘stop talking during dinner.’ Each night, she talked to the family during the whole meal, speaking at the same time as she was chewing. Aerophagia is common, a condition where excess air is swallowed during eating, often caused by talking whilst eating. This could be a reason for your discomfort.

I also saw a client who suffered from stomach pains, bloating and gas. She wanted to experiment with different diets as she was sure it must be something she was eating. When we looked at her lifestyle, it was her busy schedule causing the discomfort not the ingredients. A busy working mother, she ate breakfast standing up while she was making the kids lunches. She ate lunch in the car while she was driving or at her desk while she was answering emails, and snacked while she was literally running to and from meetings. She was not giving her digestive system the time, or providing it with the conditions it needed to function properly. She found when she stopped and ate in a relaxed environment, she did not need to go on any type of diet.

Another client came to me with uncomfortable bloating and diarrhea which he believed was due to a lactose intolerance. Now, these are definitely symptoms of lactose intolerance, but did he need to go dairy free? When we looked at what he ate and drank during the day, we found that he was having 2 1/2 cups of milk with his cereal (this is quite common), 1/2 cup of milk in each of his 3 coffees during the day (total 1 1/2 cups of milk), yoghurt for afternoon tea (2 cup serving). A couple of nights a week he would also have large bowls of ice cream. A total of at least 6 cups of dairy was causing his symptoms, not the dairy itself. He found when he cut down his portions and became more aware of his dairy intake, his symptoms disappeared, without having to go on a ‘dairy free’ diet!

My friend swore she had gluten intolerance due to bloating and stomach pains. When I looked at what she ate, she was eating too much pasta too often. Every night was a pasta meal, where pasta made up 90% of the dish, lunch was a sandwich and breakfast was toast. Her issue was not gluten itself, it was simply too much gluten. She found when she switched to oats or an omelette for breakfast, and reduced her pasta portion to 1/4 of her bowl (and increasing the vegetables and meat) her symptoms disappeared.

THE BRAIN, STRESS and DIGESTION

There is no doubt that stress effects our digestion. The brain controls our nervous system – which controls every the organ in our body. The autonomic nervous system (the big boss)  controls all of our bodily functions which occur without us even thinking and is divided into two  systems – the parasympathetic and sympathetic nervous system.

The sympathetic nervous system is responsible for what is known as our ‘fight or flight’ response. It speeds things up and also shuts some functions down, as our mechanism of dealing with a stressful situation such as being chased in the wild by a lion. When it is activated, our sympathetic nervous system increases our heart rate to pump more blood and oxygen to the muscles so that we can run away, dilates our pupils so that we have sharper vision, releases adrenalin to give us energy –  in order to escape the lion and survive.

Stress activates this sympathetic nervous system, and when activated, it actually switches off our gastro intestinal functions. It slows our digestions right down, almost to a halt!  This is a way of conserving blood flow and energy. It stops sending blood and energy to our digestive system and shunts it  to more important body systems such as our muscles, heart and lungs which are much more important for helping us to run away from the menacing  lion.

So what do we feel when the sympathetic system has shut down our gastro-intestinal function? Sluggish, wind and bloating (because the food sits in our intestine and has time to ferment and produce gas), fullness or pain (because the food has stopped moving through the intestine towards the other end and ‘banks up’ causing pain).

Our gastrointestinal system (digestion, absorption of nutrients and movement of of food through our intestines) is activated when our parasympathetic nervous system is dominating. This is the opposite of the sympathetic system and is known as the ‘rest and digest’ system. It dominates when we are relaxed and calm and is responsible for good digestive function. The world today is a hectic place, and it’s not only lions that activate our sympathetic nervous system. It’s the kids screaming for your attention, the boss needing work done yesterday, the pressures of working 2 jobs with lack of sleep, overdue bills to name a few.

Cutting out food groups can lead to nutrient deficiencies so before doing so, take a look at the quantity of food like gluten and dairy that you are eating. Also carefully look at your eating behaviour to see if there’s anything you can change to enable nervous system and digestive organs to function optimally.

If you do have gastrointestinal issues, it’s important to seek advice from a qualified professional

The Nutrition Guru is a university qualified Nutritionist, keen cook and all round myth buster. She cares passionately about advocating for holistic health and providing credible and up to date nutrition information in order for people to make their own educated decision about nutrition